When it comes to translating any piece of communication or a message from one language to another, the call that needs to be taken between hiring an expert or getting it done by just about anybody (or opting for ‘machine’ translation) becomes easy when you ask yourself one simple question – just how much can you afford to pay. Simply because a badly rendered translation done by a ‘non-expert’ almost always ends-up costing more – burning an ugly hole in the pocket while also marring reputation and goodwill.

Translation plays a seminal role in helping businesses connect with their customers in the desired manner, and for communities and countries that speak different languages to understand and interact with each other, improve bilateral relations and even negotiate trade deals. Besides, translated texts help spread the world’s knowledge, wisdom, culture and beliefs. And for all their worth, translations appearing on signposts and packshots of imported products support tourism and promote global trade.

Translation is the circulatory system of the world's literatures.

India: Home to over 133 crore people and 121 languages

India is a potpourri of culture, customs and languages. The 2011 census of India and The Food and Agricultural Organization of the United Nations indicate that there are 121 languages and 415 dialects in our country, of which the main 22 languages are spoken collectively by 97% of the total population. Statistically speaking, with a distance of 3,214 km separating the country’s northern and southern boundaries, one can expect the local language to change on an average every 26.5 km or so. However, for all practical purposes, most marketers that run pan India campaigns covering regional languages, resort to carrying out translations in 10 or 11 major languages at most. The target group’s response to these campaigns rests heavily on the communication per se and the quality of its translation.

Without translations, we would be living in provinces bordering on silence.

How much is at stake?

It cannot be stressed enough that translations need to capture the very essence of their original messages and convey them precisely and beautifully with the same meaning and in the same context, tone and spirit as they were intended, while keeping regional linguistic nuances in mind. Literal word-to-word translations almost never work, as is observed in several cases of machine translations and the work of inexperienced freelancers. Also, it’s a common fallacy to equate the ability to speak two languages with the ability to translate effectively.

Translation is at best an echo.

Ironically, the value of good translation gets emphasized only after things go wrong. The perils of mistranslations and utter translation fails are several and shuddering, causing faux pas, embarrassing situations, misunderstandings, lawsuits, financial losses, strained relations, violence and even lost lives, as we will see below.

1. Hiroshima Bombing: One little word that brought on the ‘Little Boy’

File photo of the Enola Gay returning from its Hiroshima mission (August 6, 1945). Image source: US Department of Energy.

Did you know that the catastrophic bombing of Hiroshima on August 6, 1945 by the US forces during World War II was almost entirely because of misunderstanding and outrage stemming from an ill-chosen translation of a single Japanese word? This may have gone down in history as the ‘deadliest translation error ever’.

Back in 1941, in retaliation to the oil embargo placed by the US on Japan, the Empire of Japan under the leadership of its former Emperor Hirohito, made its debut in World War II with its surprise offensive on the US Naval base Pearl Harbour in Hawaii. This was followed with several military campaigns in Asia resulting in the conquest of Hong Kong and Singapore.

Nonetheless, over the next three years, multiple victories by the allies put Japan on the defensive, and in 1945, the allied leaders met in Potsdam, Germany and submitted a strongly-worded declaration asking Japan to ‘surrender unconditionally or face prompt and utter destruction’. In Tokyo, journalists beseeched the former Prime Minister Kantarō Suzuki to share the official response to this ultimatum. Since no formal decision had been reached as yet by the Emperor, the Prime Minister intended to say that he was ‘withholding comment’, but while trying to say so, unwittingly used the word ‘mokusatsu’.

As fate would have it, this word has multiple meanings including ‘to treat with silent contempt’ and ‘to ignore,’ and news agencies and translators, who were unfamiliar with the nuance and more so with the prevailing sentiment, mistook it to mean these. The erroneous translation was consequently misinterpreted as an official response stating, “We categorically reject your ultimatum”. The allied leaders viewed this as a scornful retort. Infuriated by the seemingly impudent, cocky and audacious reply, US President Harry Truman authorised a B-29 bomber aircraft, the Enola Gay to drop the uranium gun-type 15 kiloton atomic bomb -- codenamed ‘Little Boy’ ten days later on Hiroshima.

Close to 70,000 people died immediately, while another 70,000 died due to radiation exposure over the following weeks. The overall death toll over the ensuing five years has been estimated to be 200,000. This translation error cost more than an arm and a leg, and the resulting carnage could easily have been avoided had that one word been translated correctly, carrying its intended meaning.

2. A medical mishap that cost $71 million

In 1980, a hospital in Florida admitted Willie Ramirez in a comatose state. His parents, who spoke only Spanish, were trying to explain to the hospital physician the circumstances that led to the boy’s condition. Unfortunately, the doctor didn’t understand a word of it. The hospital staff then attempted to translate into English what the parents spoke. Willie’s parents wanted to say that their son was poisoned. They used the word ‘intoxicado’ but the staff mistranslated it to mean ‘intoxicated’. Accordingly, Willie was administered treatment for drug overdose instead of detoxification, leading to grave consequences and irreversible damage. By the time Willie woke up from his coma, he was reduced to a quadriplegic, prompting his parents to sue the hospital for $71 million for medical malpractice.

What would you expect from a freelance Polish translator who’s officially hired by the US State department for the President’s state visit to Poland, and who’s paid $150 a day in 1977? Flawless rendition? Apparently not — if you knew the translator was Steven Seymour!

Seymour goes down in history for his quick succession of outrageous interpretations and hilarious translation blunders during former President Jimmy Carter’s address to the Polish people at the arrival ceremony. In his opening speech, Carter said, "I have come to learn your opinions and understand your desires for the future." Strangely, Seymour translated this as, "I desire the Poles carnally."

Carter went on to speak about his thoughts as he departed from the US to attend the state visit. Seymour’s translation conveyed that Carter had left the US never to return. Carter then stated how happy he was to be in Poland, but Seymour’s twisted translation spelt that he was happy to grasp Poland's private parts. When Carter called Poland the “ancestral home of more than 6 million Americans" Seymour processed it as "the fatherland of 10 million Americans”. Carter’s praise for the Polish constitution was mistranslated as Carter saying that the Polish constitution is the subject of ridicule.

Seymour also sullied his translation with Russian words, which didn’t go down well with the Polish people, who have been antagonistic to Russian culture. He was hurriedly replaced by another translator for the rest of the President’s visit.

In yet another incident of a diplomatic blooper, former United Nations Secretary General Kurt Waldheim visited Iran in 1980 to negotiate the release of American hostages. On his arrival in Iran, he addressed the people saying, "I have come as a mediator to work out a compromise." However, the Persian word for ‘compromise’ has a negative meaning, and the phrase was understood as "our principles were compromised." Even more strangely, the Persian equivalent of the word ‘mediator’ implies a ‘meddler’, not a friendly envoy. All in all, his message seemed to convey that he was there to compromise the morality of women. Within an hour of his address, Iranians who took offense to his seemingly scandalous message, starting pelting stones at his car.

California Dairy Industry’s famous and largely successful campaign “Got milk?” promoting the consumption of cow’s milk, was mistranslated into Spanish as “Are you lactating?” Pepsi’s ‘Come alive with the Pepsi generation’ slogan in the 1960s wasn’t well received in China – because the Chinese translation read, ‘Pepsi brings your ancestors back from the dead’. The sales of ‘Coors’ brand of beer hit a speed breaker when their English campaign “Turn it loose” was translated into Spanish as “Suffer from diarrhoea”.

While these are mistranslations, consumer health care company Walmark (yes, with a ‘k’) chooses to retain what many may consider to be a distasteful brand name, and the product in question (below) is its off-the-shelf hot drink meant to ‘maintain a health urinary tract’. Anyone for a leak?

6. Signboards that have a lot more to tell

Here are some signboards where the English translations seem to be somewhat of a disaster.

We haven’t dared to decipher this one.

This is a restaurant that apparently resorted to machine translation for rendering its name from Chinese to English. Due to a technical snag at that time, this was the error message that was thrown-up on the screen, and the same was shared with the printer for making the signboard. Bon appétit!

This is a signboard at a medical centre that must surely believe ‘laughter is the best medicine’! 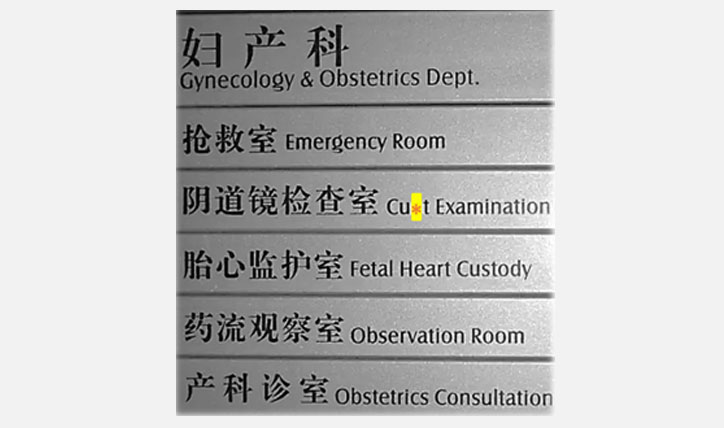 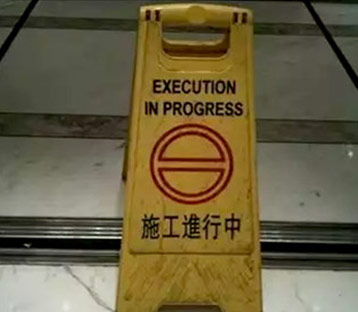 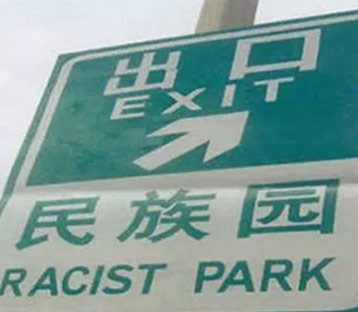 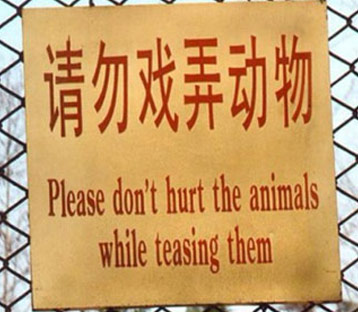 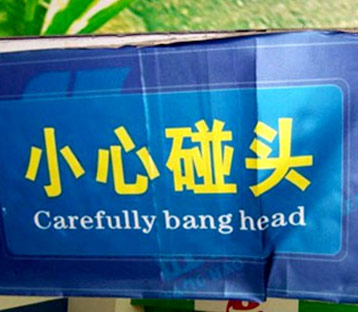 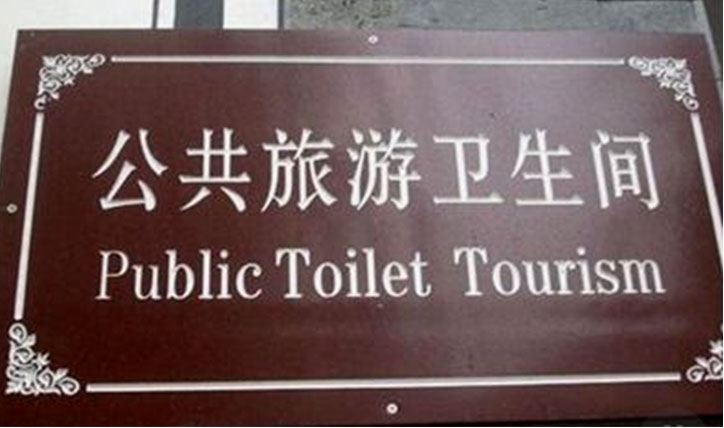 Finally, this one is from an airport in India 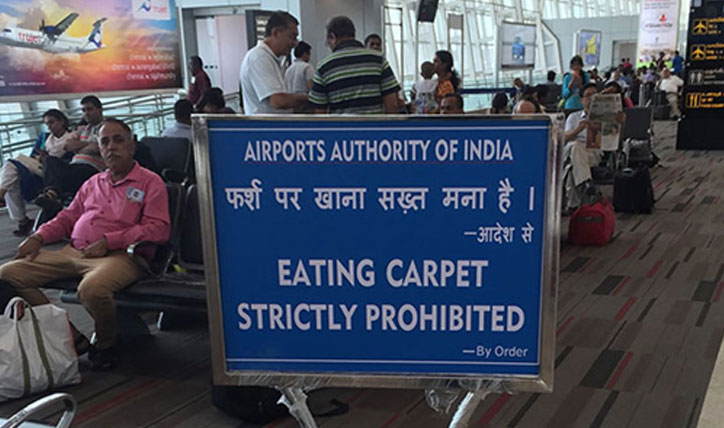 While mistranslations may be a source of laughter and amusement, it’s certainly no laughing matter for the businesses or administrations that have commissioned them. Customers or the audience generally don’t spare businesses for such errors, and there hardly is ever a second chance. So the next time you have a translation requirement, remember these consequences, and exercise due diligence in selecting your translation partner.

Get in touch with us
View Our Portfolio

X
X Feedback
Sign up for Subtext, TIC's very own corporate communication publication. Subscribe now!
Call Us Write To Us

We use cookies to enhance your browsing experience. By continuing to use our website you agree to our policies